Intake Matters: For his kids' sake

By Intake & Resident Specialist Holly Gardner
Mr. G and his two baby daughters were referred to us from City Union Mission 10/2/13. After going through the screening process, I assisted his move in to Community LINC on 10/10/13.
As all families do, Mr. G shared his story and the unique and personal experiences that led him to our door.  The most impactful was surviving a violent crime and healing from a recent gunshot wound. This is a long process and along the way he has lost some support from family and friends who didn’t have the resources and or time it took to be “family” for him and his two beautiful girls.
When he walked in the door, he sat down in my office and strongly advocated for his children.  He is seeking employment and has current job prospects.  He wants to build a new and more stable life and find extended family for his little girls. This communication came through very strongly and I have no doubt that Mr. G is on the right path.
Although he is just entering our program, I chose to highlight him and his daughters…the success is this very moment in time, not so much what is to be, but the gift of what he now has. This is what I saw in his eyes as I handed him his key.
I feel so privileged to be a small part of this organization and look forward to his journey as we continue to coach and wrap our arms around his family.
Posted by Laura Gray at 4:31 PM No comments:

Program Matters: How Far Do We Go?

By Senior Director of Programs and Operations Jeannine Short
In response to the Federal 10-year plan to end homelessness, Community LINC has realigned its programs and service delivery model with the objective of serving more homeless families.  To this end, we have adopted the rapid rehousing and housing-first models and their consequent paradigms…. Well, at least to some degree.
In general, these paradigms purport that: 1) homeless persons are more receptive to services provided in their own environment, 2) homeless persons need not be made “housing-ready”, 3) issues, such as substance abuse and mental illness, should not be barriers to housing, and 4) embraces a “harm reduction” methodology which challenges the rigidity of long-standing rules and regulations. While these models are gaining wide acceptance throughout the social service industry at large, the approaches are still relatively new and the long-term impact currently unknown.
As a learning organization, Community LINC has done well to understand and even implement some of these new service delivery approaches. However, we have to ask ourselves the hard question of just how far we should go.  Do we incorporate the whole of these emerging paradigms because it appears that such will become future best practice? By doing so, would we on an agency level actually be embracing the “one-size-fits-all” ideology that the paradigms are designed to mitigate? If we exercise latitude in deciding what works best for our agency, will our services and methods be deemed antiquated and eventually become obsolete?
Posted by Laura Gray at 12:49 PM No comments:

By Director of Mental Wellness Gail Byers
Establishing trust in a therapeutic relationship can be challenging, particularly in the population we serve.  Gaining trust meets some of the components of Maslow’s  Hierarchy, i.e. safety needs which involve, security of body, resources, employment, family, health, and property.  Other components include esteem which is involves respect of others and respect by others.
The point is that when certain criteria is fulfilled, as indicated in Maslow’s hierarchies, trust is subsequently established.
This continues to be proved true.
In a recent session a young woman revealed that she was raped as a child and never told anyone until now. She is 34 years old.
Keep in mind that we had three previous sessions.  While it was a tremendous relief, as indicated by her countenance, the significance of her feeling safe enough to reveal the victimization was tantamount.  Imagine internalizing this trauma and the subsequent implications….shame/guilt, low self-worth, a skewed understanding of love, etc. These are all emotions that negatively impact lifelong decisions.
However, the positive in this encounter is the significance of trauma informed care.  With this knowledge, comes clarity, resulting in more focused and intentional therapy.
Posted by Laura Gray at 7:30 AM No comments:

Jobs Matter: And she's well on her way to being self-sufficient again 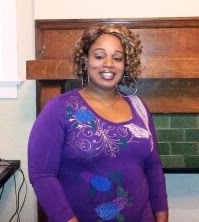 Hard work, determination, and the right attitude drove K to rise above the odds. She has overcome some huge barriers - multiple warrants and utility bills totaling more than $1000.
At first, concentrating long enough to complete a good solid application was a major accomplishment. She presented herself as an undesirable candidate to most employers because of a weak work history and very little experience.
But, as each barrier was eliminated, she began to appear more relieved and started to paint a picture of her employability and experience more effectively.
She put in tons of applications and began to attend job fairs all over the city. She went to several interviews, but didn’t get a positive response. We finally decided that a better strategy may be to apply in person and present herself to as many employers as possible.
She attended a job fair at hotel opening in the area and ended up being hired on the spot as a housekeeper. At almost the same time, her application for permanent housing was approved.
Before the end of December 2013 she will be in her new home with gainful employment. What a huge success for someone who had a hard time seeing a light at the end of the tunnel.
Posted by Laura Gray at 8:00 AM No comments:

By Volunteer Coordinator Kate Nevins
This year for Halloween, Church of the Resurrection Downtown brought a “trunk or treat” to Community LINC’s families.

Members of the church dressed up in costume, decorated their cars and came to Community LINC to pass candy out of their trunks.

Our kids had so much fun!
It’s not always easy for the families we serve to celebrate and enjoy the holidays as they are transitioning out of homelessness and poverty. That is why we need volunteers to help us. Together, we can foster an environment where children are able to play like other children and families can pause and enjoy time with their families, which is what the holidays are all about.
Thanks to Church of the Resurrection for making Halloween such a success!
Posted by Laura Gray at 8:00 AM No comments:

The shutdown ended and sequestration remains in effect. Because public policy is shaped by perceptions of homelessness and the homeless, it seems important to dispel some of the myths that have been around for years now.
Perception #1: Let’s start with the impression that homeless people are all drug addicts, winos, mentally ill or criminals. 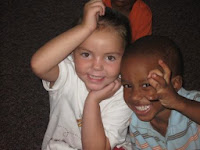 Reality: In 2012, families comprised 46% of Kansas City homeless. In our experience, 2/3 of the family is children. Families have been the fastest growing segment of the homeless population for the last several years.
Perception #2: Homeless people don’t want to work.
Reality: Every adult who comes to Community LINC looks for a job. About 1/3 of our homeless families were employed when they came into our program. Unfortunately, they earned less than the federal poverty level.  In 2012, 75% of those able to exit for their own home exceeded the federal poverty level.
Perception #3: Anyone who works can get housing.
Reality: In 2012 the median monthly housing cost for a renter in Kansas City was $764. The median wage for a fast food worker was $8.69 per hour or $1,506 per month IF they are full time. At 50% of monthly income, they will be considered severely housing cost burdened. Without benefits, if anything goes wrong, a fast food worker remains at risk of homelessness. The average wage for our families upon exit in 2012 was $10.10 and $8.98 this year to date.
Perception #3: Homelessness is a lifestyle choice.
Reality: We haven’t encountered any homeless families that chose to be homeless. We’ve encountered people who were unemployed, or in low wage jobs, escaping domestic violence, etc. who just couldn’t find housing they could afford.
Perception #4: Services are just a handout.
Reality: We believe in a hand up, not a hand out. Our partnership with the families we serve includes the expectation that they are moving toward self-sufficiency. We provide job search support, mental health counseling, and life skills like budgeting and savings. In other words, we provide the tools clients need for self-sufficiency.
Perception #5: It’s an insurmountable problem.
Reality: There are programs that work. This year, about 96% of exiting our families are no longer among the homeless and about 75% left for permanent homes of their own. Nationally, the focus on housing first and then services has reduced the number of chronically homeless individuals by a third.
Posted by Laura Gray at 11:14 AM No comments: